Researchers Threaten Robot To See If Humans Will Care

In the future, robots will step in as our carers, companions, and teachers. But will we actually empathize with them in the same way that humans empathize with each other. Researchers from Toyohashi University of Technology in Japan, presented some neurophysiological evidence that confirms humans feel empathy when they see a human-shaped robot hand get hurt, similar to when they see an actual human hand get hurt. For the experiment, the scientists showed 15 volunteers many photographs from the first-person perspective of both a human and a human-shaped robot hand in different painful and non-painful situations. For example, one of the pictures showed a human being cut by a knife and a robotic finger being cut by a knife and in another picture it showed the knife at a safe distance from the human hand or robot hand. They attached devices to the volunteers to measure their neurological responses to each image.

The researchers found that the human observers showed similar empathic responses to the robots as they did to other humans. Humans can attribute humanity to robots and feel their pain because the basic shape of the robot hand in the present study was the same as that of the human hand. Some say studies like this one are important given the way social robots such as care and companion bots would become increasingly widespread in society. The need to feel empathy toward robots would depend on their application. For instance, if they were being used in social contexts such as hospitals and schools, then inciting empathy from humans would be important, but not so much if they were used in industrial applications such as factories.

Over the past years, as the push to integrate robots into society continues, much research has been conducted on how humans respond to robots. In October 2014, researchers presented a paper detailing how humans were more likely to relate to their robotic counterparts when they were just as flawed as they were. And back in 2010, Italian researchers analysed the effects on humans if they were to start bullying their robotic counterparts. Next up, the researchers are going to test how empathy levels would differ when volunteers were presented with a differently-shaped robot hand, say one without fingers that the likes of tiny space-faring android bot Kirobo have. Would we feel equally sad if that got slashed? 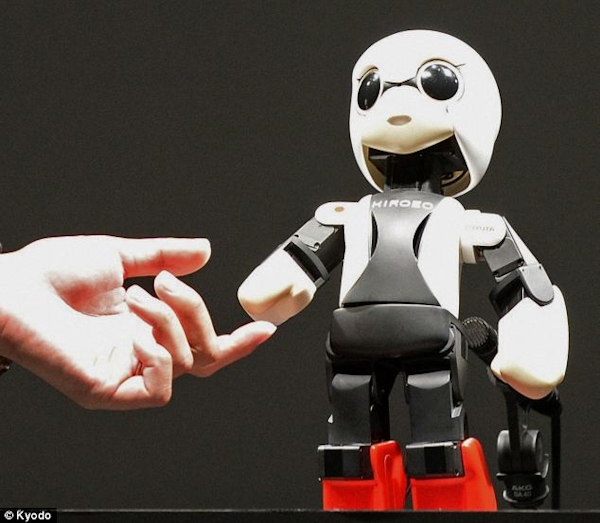